Some things never change. As usual, Dad is chained to his desk, scrambling to clear the mountains of paperwork that accumulate after spending a year away from Mozambique and now resuming construction work on the hospital. In his desperation to get word out to you, Dad has asked me (Kent)
to end the eight months of silence since the family’s last newsletter. So I will fill in a few of the events that have happened since my arrival in Mozambique two weeks ago.

Thanks to the generosity of Believers’ Fellowship in Fort Worth, I am home for the summer to help Dad with his various administrative tasks before, during, and after the FIEL conference. This is usually a hectic time with many time-consuming, thankless jobs that tend to fall on my dad’s already laden shoulders. So I’m doing what I can to share some of the load, as is my best friend from college, Chris Musser, who has joined us in Mozambique this summer.

My sister, Sarah Beth, remained in the States. Through a providential series of events, she landed a job in Brevard, North Carolina, as a counselor at Ridgehaven Christian Camp. Because this is her first paid position as an employee, Sarah felt a little nervous going into the summer, especially since she had never even attended camp before. But she maintained that Ridgehaven would be a growing experience which would stretch her far outside her comfort zone. From what we gather from her weekly phone calls, the Lord is blessing her time at camp and she is excited about her work and colleagues.

The opportunity to get practical, handyman experience at the hospital construction site was a major player in my decision to come home during break. Uncle Mike and Auntie Hilda Stolk flew into Nampula from South Africa nearly a week before my return. As indefatigable and driven as ever, these dear servants of God are convinced the Lord would have them see to completion the construction of the hospital. Their tender, soft- spoken demeanor belies the energy and motivation that makes the Stolks nearly the sole reason the hospital building is as far along as it is. Even before arriving in Mozambique, Uncle Mike was dashing around the Johannesburg-Pretoria area loading vital construction supplies into a forty foot container to be shipped to Nampula. Now he’s on the job site by six in the morning coordinating and directing the thirty workers currently plastering, painting, digging, and chiseling.

Chris and I spent last week on the construction site learning how to pour concrete, lay block, and plaster. The results of our craftsmanship and artistry will never be fully appreciated– no one fully appreciates a septic tank, which is why everyone keeps them hidden underground. Our tank was
one of two constructed last week. While we wrestled blocks into place in our six-foot-deep hole, Uncle Mike had the two operating rooms plastered, the front road to the hospital re-graded, the plumbing system to the sanitation blocks redone, the wards prepared for painting, and a couple thousand cement bricks made with a machine of his own creation welded from scrap metal. Not bad for a week’s work.

Sweating with the men out on the site helped me appreciate two things. First, I have a new found respect for the Mozambican workers who do backbreaking manual labor without the benefit of the sophisticated
machinery that saves hours of con- struction time in places like South Africa and the United States. Second, I am more fully aware of Uncle Mike’s skills as a foreman. He is incredibly patient and very understanding of the men. But he also expects good performance from them and praises them for doing well. The laborers respect both him and Auntie Hilda, who frequently joins her husband in inspecting the work. The Stolks are both a godsend to our family and a beautiful example of what loving Christian service should look like.

The work on the hospital has given Dad even more administrative balls to juggle, such as hiring new hands, preparing their contracts, making sure the men have the materials needed to continue with their work, and sorting through the host of expenditures that have to be accounted for. (Dad spends hours picking through the tangles in the mission’s various financial accounts.) Shortly after I arrived, Dad and I interviewed over fifty men vying for the handful of positions needed on the construction team. In a process that went well into the afternoon, we asked only two questions: What was their construction experience and what could they tell us about God? I was somewhat disappointed when only two men returned answers that indicated they were God-fearers, and one of these was a Muslim whose response was better than nearly all the self-professed Christians in the group!

However, if I am tempted to despair over the bleak state of Christianity in Mozambique, Sunday mornings with the brothers in our church do much to encourage me. I am so thankful for the band of faithful in our little church. What we lack in numbers, we make up for in maturity and under- standing of the word. For example, I was surprised this Sunday by the excellent commemoration of the Lord’s Supper led by Jermias António, a young man who had only just joined the church shortly after I left for college two years ago. This saint’s insightful comments and powerful delivery reminded me how richly the Lord has blessed our congregation with men who understand His word.

Jermias has blessed our church with more than his teaching. My first Sunday back, I met two brothers, Calton and Rosário, from our neighborhood who were first introduced to our church through Jermias’s witness. Last Sunday, we baptized Rosário on his profession of faith and the same day accepted Calton (who has successfully completed the church’s discipleship program under Jermias’s tutelage) into church membership.
I am impressed with Calton. Two weeks ago he had asked permission from the church leaders to share during the church’s time of open participation. Considering this was his first time teaching from the word, Calton exposited well and made applicable points. Most encouraging to me was that the lesson seemed to spring out of his own personal experience walking with God. And last Sunday during the ceremony accepting him into membership, Calton also gave one of the best testimonies of salvation I have heard from a Mozambican joining our church.

While I’m excited for Jermias, Calton, and Rosário, I also tremble for them. So many of the young men for whom we have had high hopes have been particularly targeted by the devil for temptation and spiritual or physical hardship. Because the evil one fears the transformative power of God clearly at work in the lives of excited, young, Mozambican believers and wants to wither their witness, Satan has frequently thrown up major stumbling blocks before our men, some of whom have fallen hard into crippling sin. Though His power is far greater than the devil’s, the Lord has allowed these disappointments, I think, to remind us that our resistance to sin crumbles if we do not face temptation with total dependence on Him for deliverance. I’ve come to realize how desperately we must cling to the God of Jude 24. 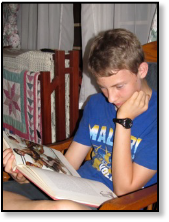 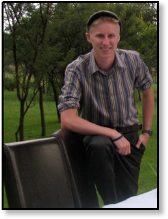 Problems with sin and job placements outside of Nampula have whittled away at our small congregation. I’ve been surprised to see at times fewer than thirty adults attending worship, and even the usually large number kids in Sunday School has dropped considerably. Last Sunday, for example, we lost another of our members when a good friend of mine (who works for the government as a tax assessor) was transferred to the village of Ribaue, 120 km outside Nampula. Given the horrific conditions of the roads, he will probably not be returning to the city frequently. I worry for his spiritual health because I’ve not heard of a mature Christian movement in that area. We’ve been praying that he will find Christian fellowship and brothers to keep him from giving into the pressures of the corrupt system he works under.

In other news, Mom keeps busy as a hostess. As Dad always says, Mom makes Mozambique a pleasurable experience for all who live with us. She only has three guests in the house currently, though next week we will be receiving Roger Clark and Chris Dighton from First Baptist Church in Clinton, LA, who are coming to do electrical work on the hospital.

I’ve been amazed at the spiritual growth I’ve seen in my brothers, Andrew and Benaiah. Andrew is taking on leadership responsibilities at the missionary youth group here in Nampula. 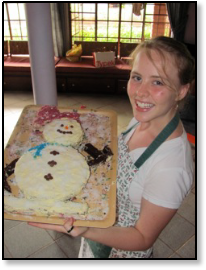 Though the group is under the guidance of a missionary couple with New Tribes, Andrew leads worship regularly and frequently functions as the voice of the youth in their meetings. Benaiah is growing like the American deficit. Standing at five foot, eight inches, he celebrates every time he passes another family member. He is also moving through the family’s scripture memory program at stunning pace, memorizing a new verse every couple of days.

Gracie has started her own business, Goodness Gracious Goodies. Combining her creativity with her loves for people and baking, she discovered a niche in the Mozambican world of business–selling baked goods to missionaries. Though this means yet another activity added to her busy life, Gracie enjoys her work and hopes to make enough money to visit a friend of hers in Zambia.

Well, that’s everything for now. I know Dad is hoping to get a newsletter out in the next few weeks. He’s eager to report on the latest developments with the Biblioteca FIEL, the Reformed movement underway in Nampula, and the efforts at recruiting missionaries for the various ministries Grace Missions engages in here in Mozambique.

Before I close, I would ask your prayers for the FIEL Conference coming up next month. It’s never too early to commit the work to the Lord, particularly since we will begin preparations for the conference within the next few weeks.

Thank you for your prayers, support, and love for our family. Your partnership has brought our family through twenty-two years of blessing and trial, joy and tears. Thinking over all the work Grace Missions has done in Nampula, I am reminded how mightily the Lord has used your intercession for Mozambique to accomplish much for His name.
“I thank my God in all my remembrance of you… because of your partnership in the gospel from the first day until now.” – Philippians 1:3, 5