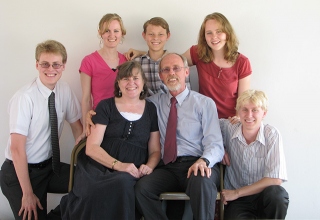 The Woodrow family are members of Faith Community Church in Oxnard, California. Charles is a general surgeon certified by the American Board of Surgery in 1984 and re-certified in 1993. He is a Fellow in the American College of Surgeons.

Charles was sent to the field with his family in 1990. He gained entrance to the country while it was still a Marxist state by accepting a contract to work in a government hospital in Nampula.

The Lord saved Charles at age 20 while a sophomore in college. In August of 1974, a year and a half after his conversion, Charles discerned the Lord’s call to missions. By October 1985, through a series of compelling circumstances, the Lord directed his attention to Mozambique as his future mission field. Before leaving the States, Charles met and married Julie Marie Vawter in February 1988. Later the same year they left for language school in Brazil and have served in Mozambique since March, 1990.